Back From Camp MiniHaHa '13 and The Project

The time, as usual, was too short and we didn't get as much done as we had hoped to do, but we ate lots of chocolate and had lots of fun. The camp project this year was a streetscape in a gatorboard box, but the prototype was a bit large for me - I am running out of space for large projects - so I brought my own, wooden box with me. I prepped a little, papering the walls, building the little side window, and panelling the wall below the paper, before heading off for Camp. This was the box on Day 1 (Thursday): 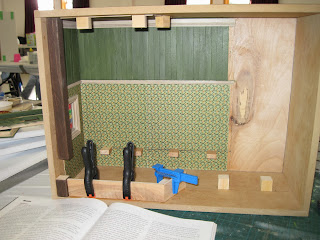 It is upside-down in this photo, while I was fitting the upper façade of the building. I had installed a baseboard, chair rail and framed the window by this point. This project came from Dollshouse Nederland, a small and wonderful Dutch magazine crammed full of excellent projects of all sizes. 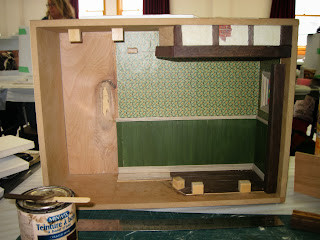 Here it is a little later (Friday); now it is right-side up and the floor has been partially installed, ready to build the lower façade of the building. The upper one has been clad with paper clay, except for the slanted wall which is still bare wood. The little section of bricks is a left-over from doing the walls of the Tudor market hall; I find the bits useful for small projects like this one. The angles of the window wall caused me a lot of problems, and took up a lot of time to get right; as well, somehow my measurements didn't quite fit, so I had to add some pieces to the framing of the upper façade. And then, of course, there is the waiting for stain, paint, paper clay and glue to dry... 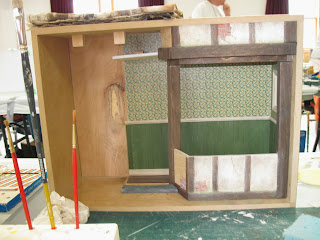 Sunday morning, the lower façade had been clad, and both the upper and the lower were aged; I used a very light yellowy-grey wash to dirty the white clay, and then used powdered chalk to age the pieces. There is also a beamed ceiling in place, not very visible unless you turn the box upside-down.  I am going to make some  changes to the original project, and put the door on the ground level rather than a couple of steps up; while the difference in levels is interesting, it makes no sense as you would then need a platform just inside the door and a set of steps down to the tiny sales level. This requires measuring and cutting a new door frame, for which I need the assistance of my resident carpenter on the table saw. More later!

The shop was influenced by the work of the Dutch artist Anton Pieck, and is sort of Dickensian in appearance. It is going to be a pawn shop, as I can display some nice items in the shop and the shop window that I don't have a home for right now. The bare section to the left will have a faux door, and the impression of an alleyway beyond that; these are also being redesigned a bit, as I want my alley just a bit wider than the original design had.

Besides a new door, I also have to install the removable shop window, which has a set of built-in display shelves. When the project is finished, the only way in is by way of the slide-out window construction, unless you happen to be a 1/12 scale person....

I splurged and bought a wonderful battery-operated Victorian LED street lamp, which will be mounted on the left wall. The shop inside will be lit by an LED light with the switch on the back of the box, so drilling is required for the wire. For this lamp, I hope to use a vintage Lucite bead as the shade; I have several trumpet-shaped ones which are wonderful for both uplights and pendant ceiling lights. Add a bit of brass tube and a back plate, and it should look pretty good. There will also be a wrought-iron hanging bracket with the old symbol for a pawn shop, three gold balls hanging from chains. I have the bracket, but have to add a hanging loop and make up the hanging gold balls.

That's it for now, I have to go and unpack some more. Back soon with some of the goings-on at camp and photos of the campers busily at work in the work room - a new-to-us very large space with spectacular natural light, and an impressive view of the Annapolis Basin of the Bay of Fundy.

Posted by pulchinella's cellar at 12:59