More Things That Are Now Finished 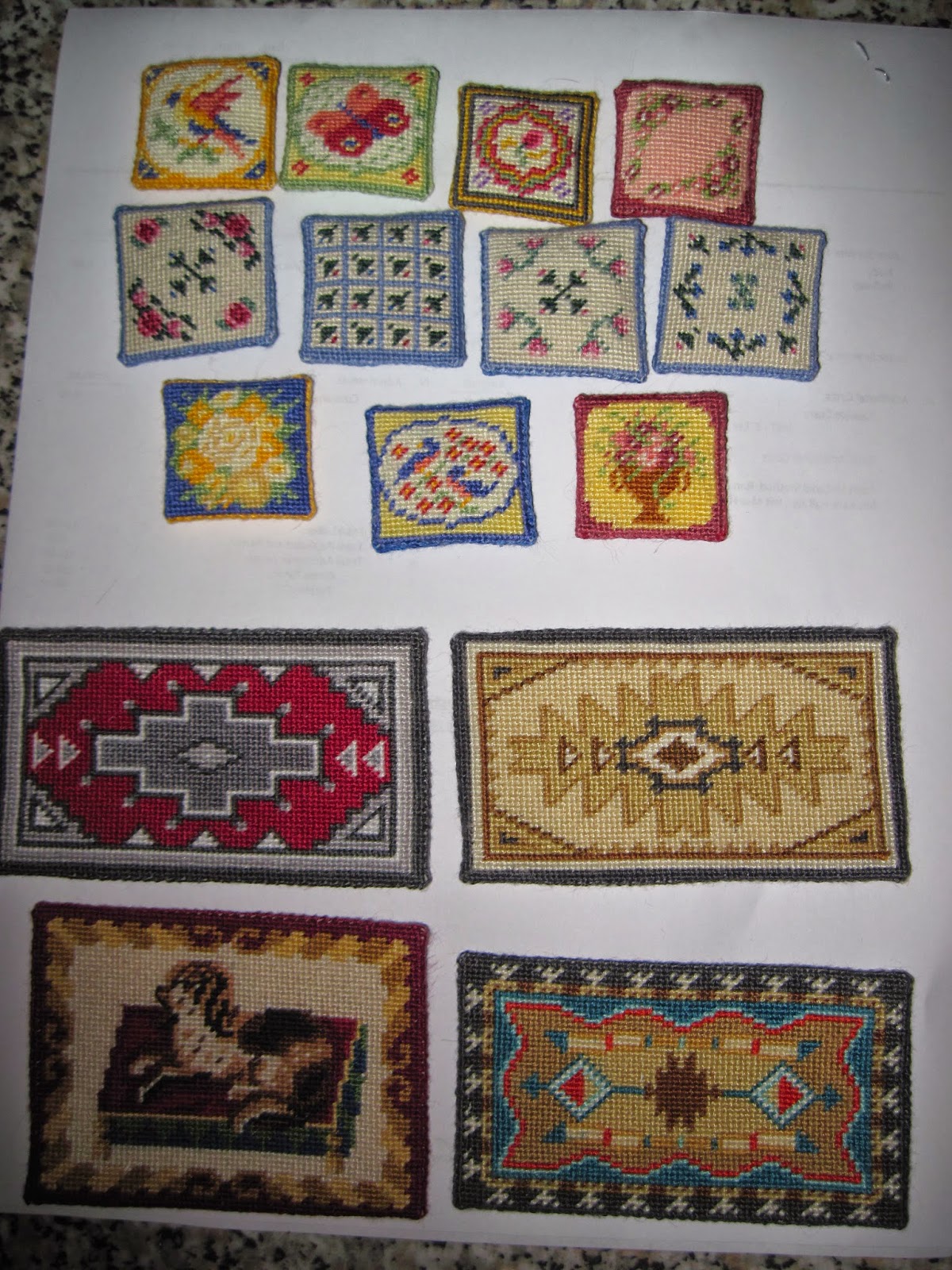 If you are at all like me, you have a "safe" place where you put things you need to retrieve again; and like me, you probably forget where your safe place was. Well, these cushions and rugs turned up while I was looking for something totally different, so I decided to finish them and put them in my shop box which is truly a "safe" place. These are all 1/12 scale, the cushions and dog rug being done on 22 ct canvas, with the Navajo rugs done on 18 ct Aida - I love their colours, almost makes me wish I was younger and could allow myself to start a southwest project.... 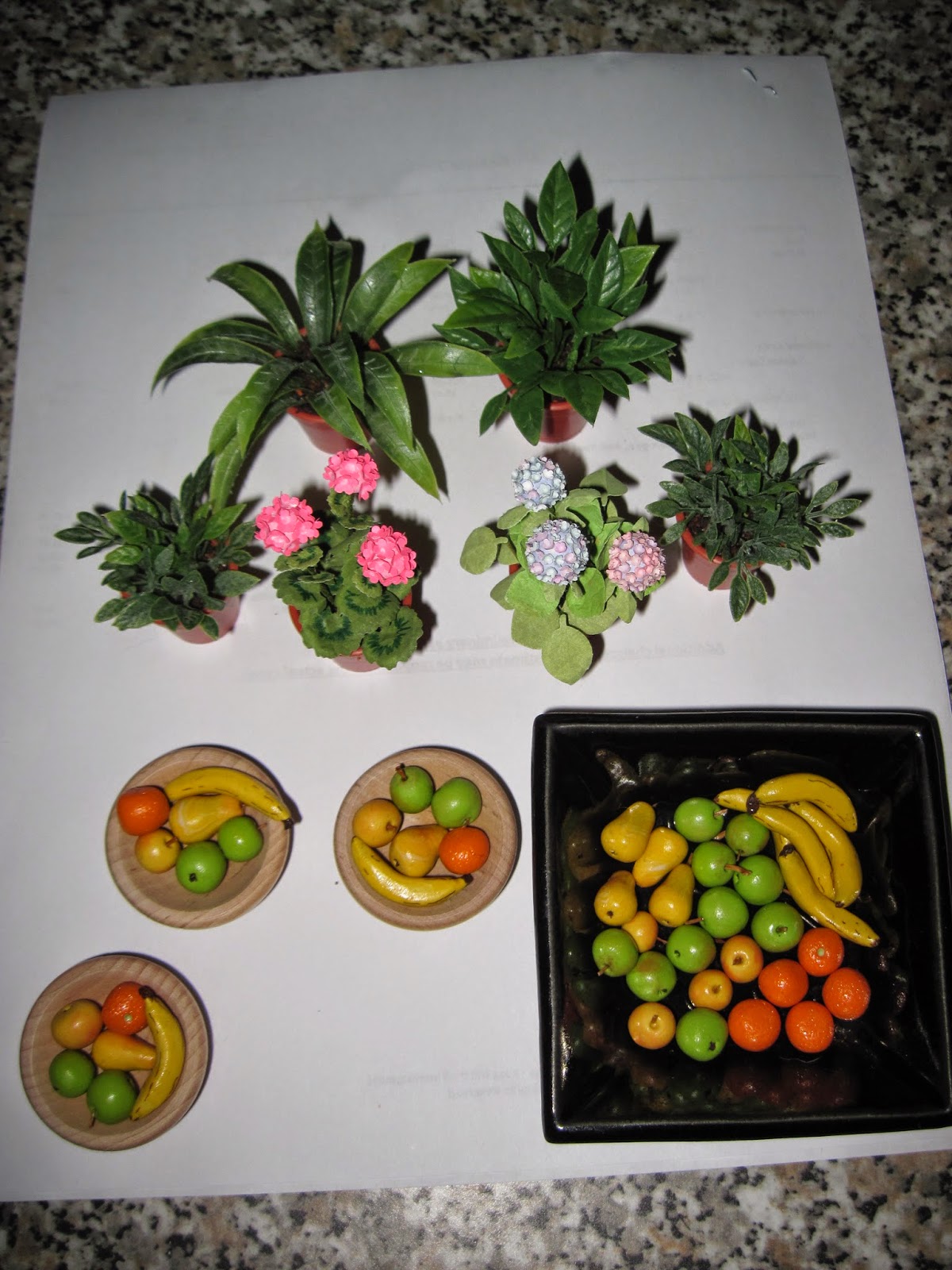 The plants are 1/6 scale; these were made specifically for the Moncton show. The fruit was made in both 1/12 and 1/6 scale, showing here is the larger size. I still have to stain the fruit bowls, but that will have to wait until next week as we are once again heading out for the Culloden Memorial in Knoidart, Nova Scotia. It has been snowing all day (that's right, snowing although it is the end of April!), so it will be a very cold ceremony, as it is held on a bleak spot on the Northumberland Strait shore. I feel sorry already for  the men in their kilts. Even people who generally love the winter season have had enough of this one!

My hands will not be idle; I have a larger scale wool rug that needs its background done in basket-weave stitch, that should keep my hands occupied while listening - indoors, thank goodness- to speakers, singers and musicians on Saturday. I am not a whiskey fan, like all those descendants of the Nova Scotia Scots!
Posted by pulchinella's cellar at 15:47 1 comment:

Did I Fool You? 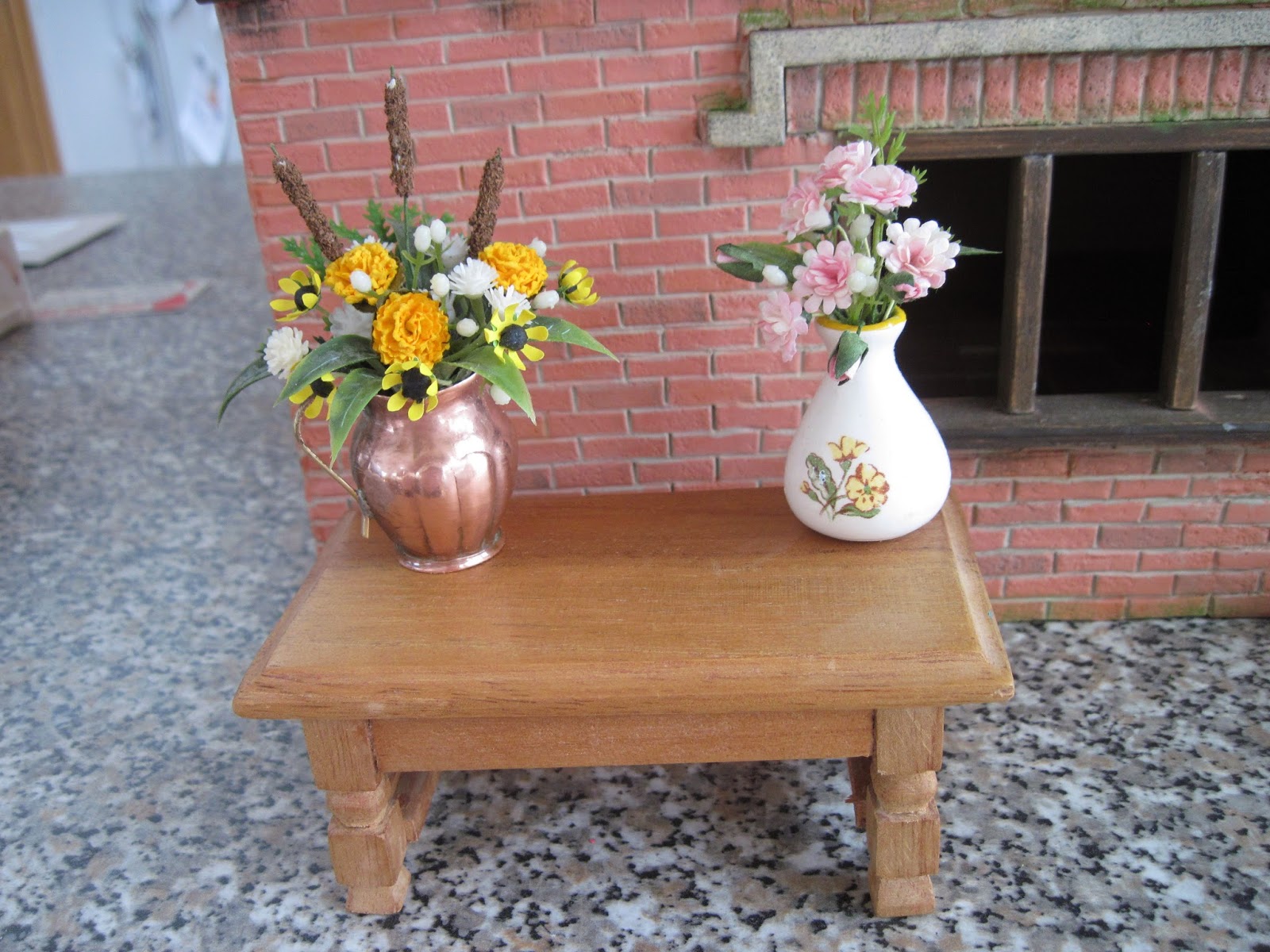 Anyone with a good 1/12 eye will be able to tell that these floral arrangements are too big, and you would be right; they are fashion doll or 1/6 size.

A number of fashion doll collectors show their treasures at the Moncton Miniature and Doll Club Show, held this year on May 4. They had asked me if I would try some fashion doll scale items, and I decided to fill an apparent little niche in my market. These are the first two arrangements I've done in that scale, and consist of a mix of purchased paper flowers, plastic foliage, and my own hand-made flowers. The little containers, of which I have 3 more, were picked up at flea markets and antique shows in the past year. They are sitting on a hand-carved Barbie-scale table my youngest daughter acquired, along with a whole host of other nice Barbie furniture to match, during the years we were living in Kingston, Jamaica.

I've also tried some fashion doll scale cushions, and a rug. If the items are well received, I may add this particular scale to my occasional show offerings. It's kind of fun trying another scale.

Back to work! The sun is shining, my glue is too thick, I think I have to head into town tomorrow.
Posted by pulchinella's cellar at 13:42 1 comment:

Email ThisBlogThis!Share to TwitterShare to FacebookShare to Pinterest
Labels: Flowers

What A Beautiful Chinese Doll! 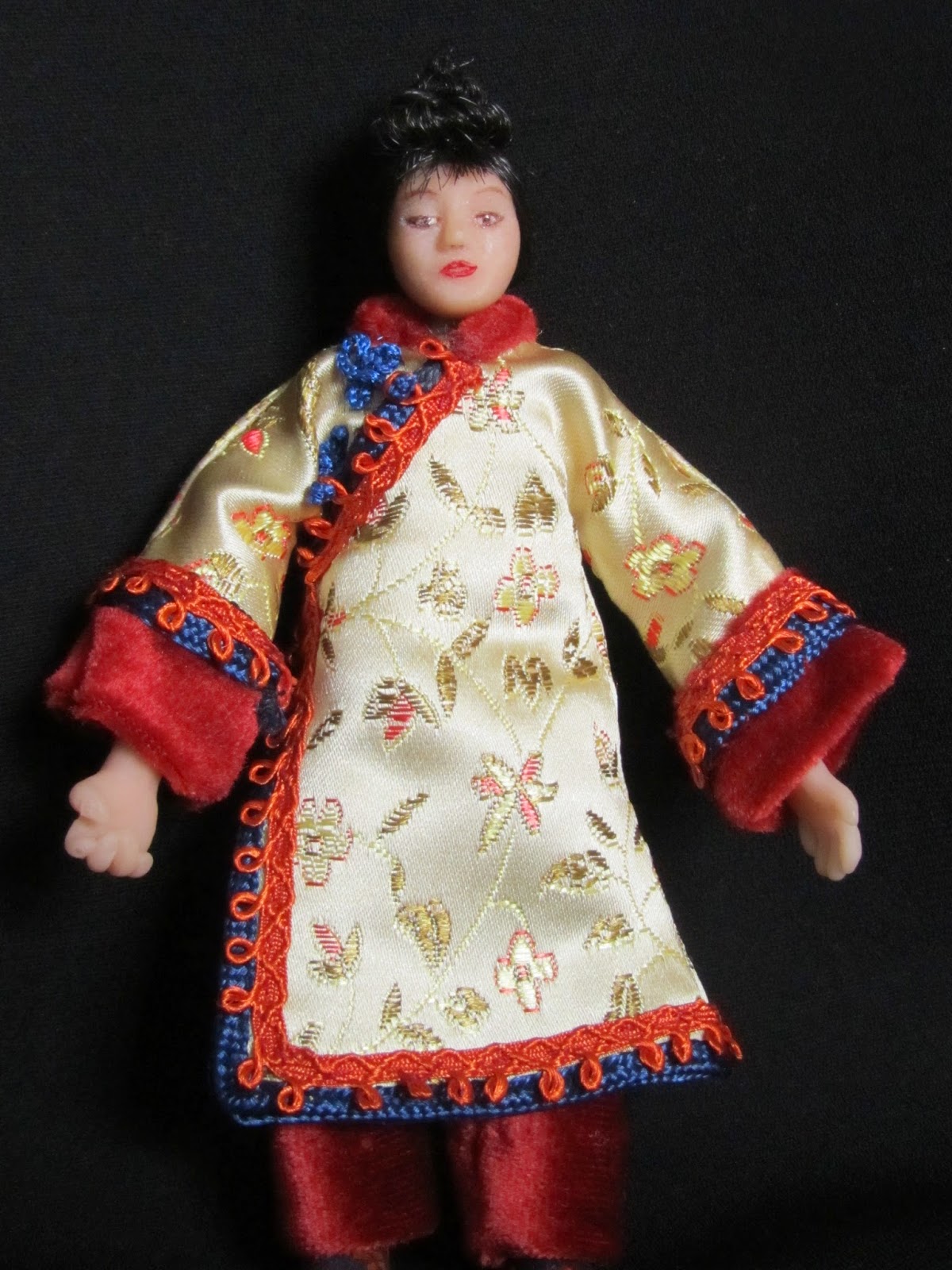 Last year in June I taught a one-day class in Nova Scotia on polymer clay doll sculpting. One of the students, Sheena McC., had a Chinese setting but hadn't been able to find a Chinese lady doll anywhere. She sculpted one in the class (photos back in June of 2013), but found it to be too masculine. She sculpted another doll, and this is the result. Isn't she just gorgeous? 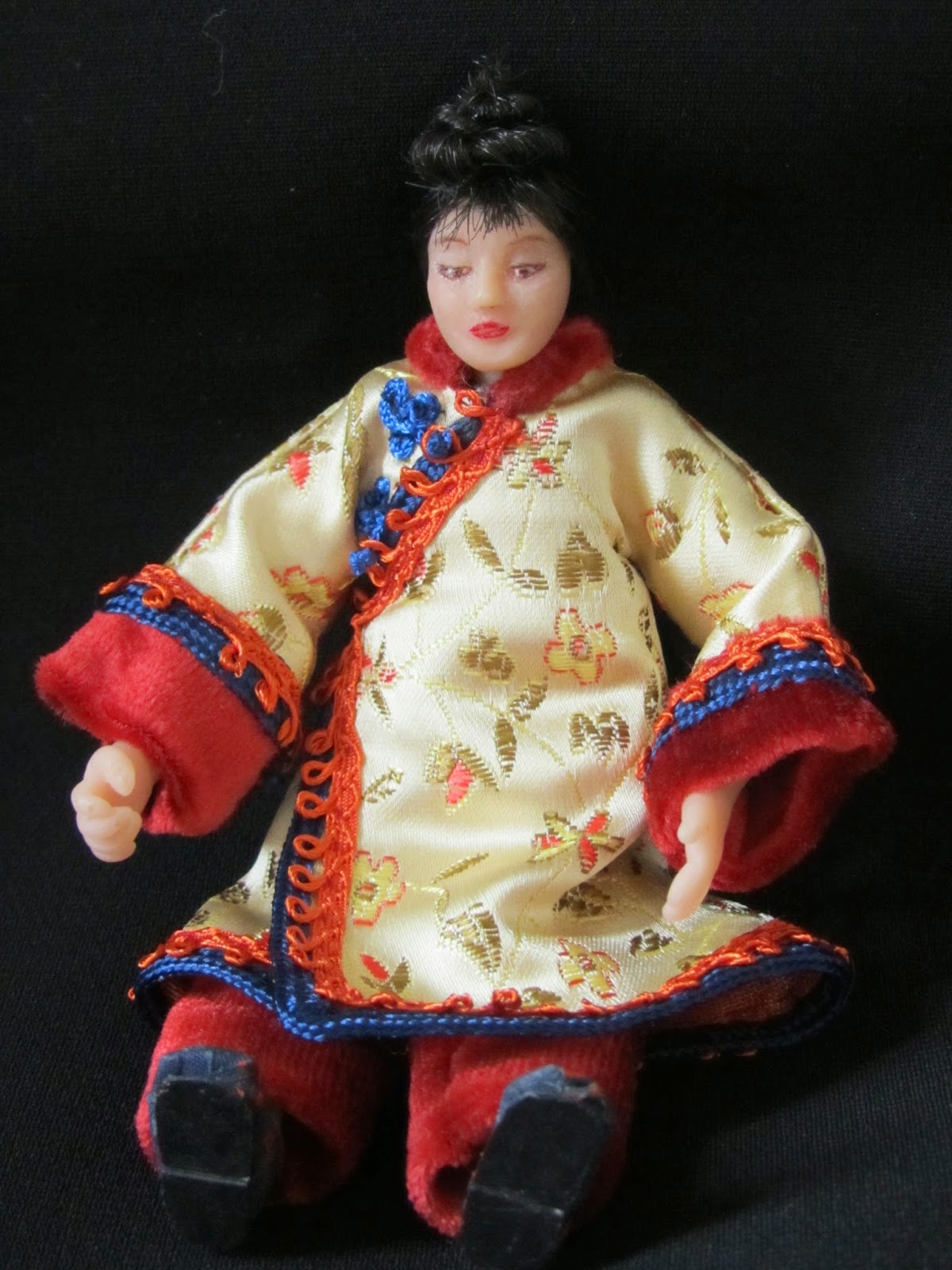 Sheena had an art background, which may have helped her in creating this beauty, but this is just the second time she had worked in polymer clay! I just love this little personage, and the costume Sheena made for her is absolutely beautiful, delicate brocade and velvet. This lovely tiny lady was one of the display items at the CFB Shearwater Hobby Show two weekends ago. I am very glad that Sheena allowed me to share her creation on this blog. Hopefully I will get to see her in her setting some day.
Posted by pulchinella's cellar at 18:15 No comments:

Getting Ready for Another Show 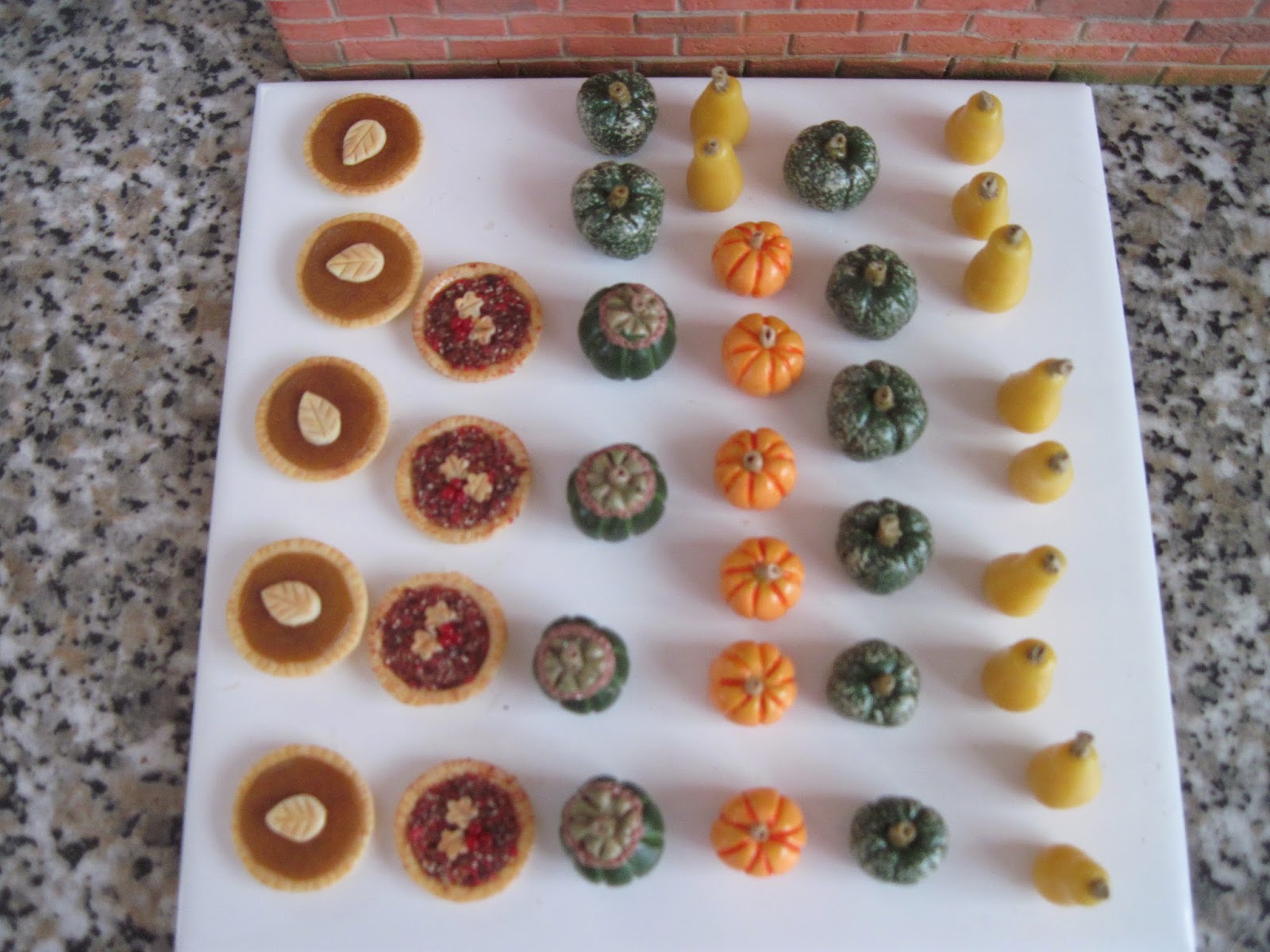 So that's four mince pies, five pumpkin pies, twelve butternut squash, eight sweet dumpling squash, six Jack-Be-Little squash and four buttercup squash; re-stocking for the Moncton Miniature and Doll Show has begun. My hands are undergoing constant attention with Badger Balm in an effort to soften up my fingertips; fingerprints and polymer clay work do not go well together. I am out of practice; it takes a lot of work to soften and mix clays that haven't been touched in nearly a year.

Three cushion tops have been worked, and I am now edging them prior to sewing them up. Four more interesting designs are waiting to be worked. My stock is so low I have to give some time to this project. As well, I've been requested to try some 1/6 or Fashion Doll scale items for this show.

We thought winter was over; however, it has been snowing lightly for the last couple of hours. The poor robins are back, and are probably wondering what happened. The only places for them to find worms is right on the edge of roads; gardens and fields are still under several feet of snow. Overnight, our compost bins were raided, with raccoons  being the likely suspects. Boy, did they leave a mess!

Right now I am kind of seeing double, with or without glasses, so I think I will have to take a little break. While visiting an antique show briefly this afternoon, I found a tiny blown glass jug with a cork in it, and a little yellowish handle; this will likely go into the Apothecary shop with some colourful liquid in it, if I can get the teeny broken cork out....

Posted by pulchinella's cellar at 13:51 No comments:

Today, I felt like making some flowers. I had seen an excellent tutorial in AIM Magazine On-Line for making marigolds, which some of us know better as calendulas or pot marigolds. This plant's flowers are edible, which is why they are known as pot marigolds, but they were also an integral part of any medicinal garden in the medieval period. 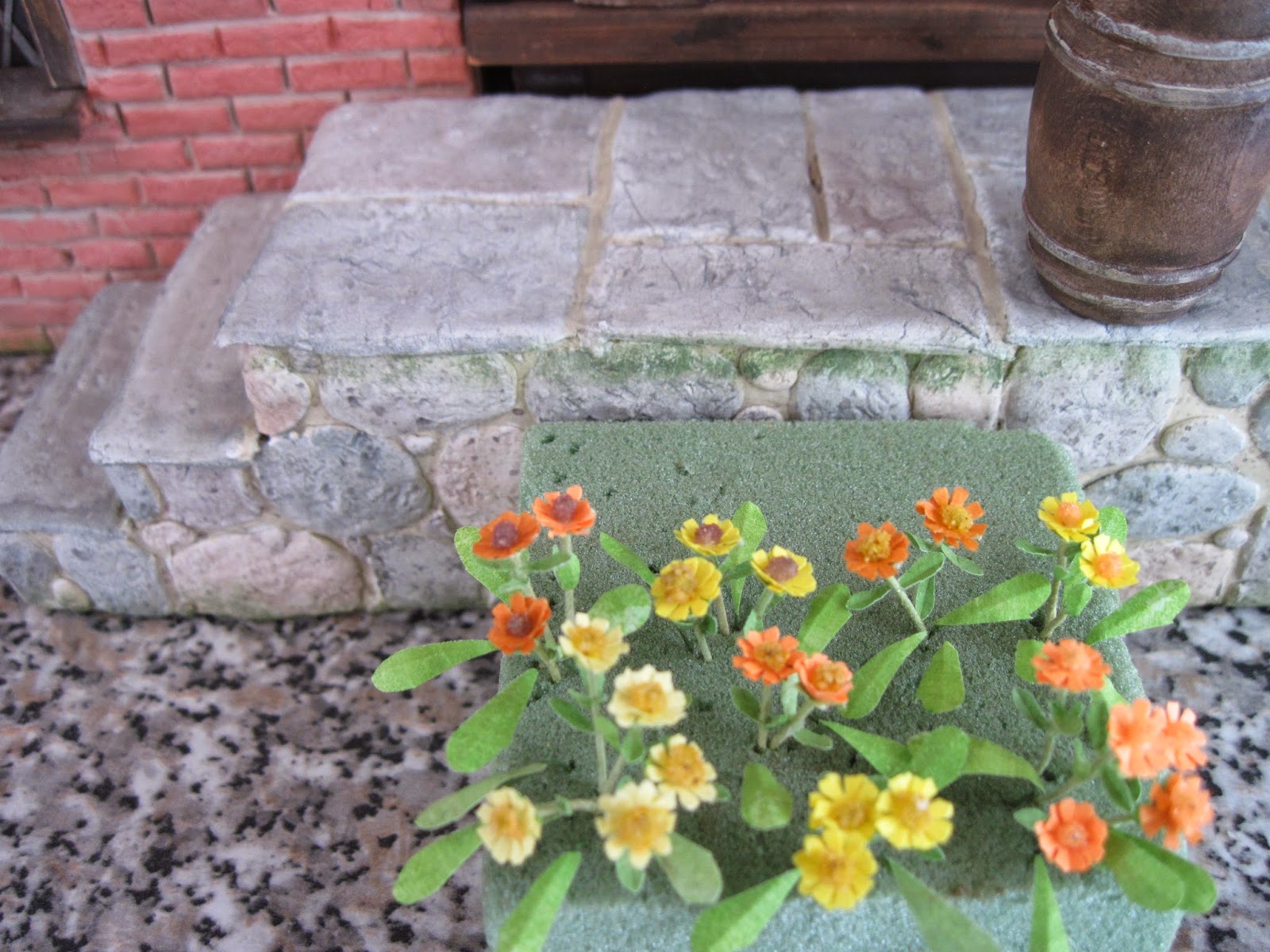 The Latin name is Calendula officinalis, and the medicinal parts include the leaves and flowers. They were used as teas a wide variety of stomach ailments, for intestinal disturbances, against vomiting, fever, boils and abscesses, while a salve made from them was used for bruises, sprains and wart removal. Very useful, thus a patch is required in the eventual Apothecary Garden.

There are already some other plants I've made for the garden, mostly from kits I acquired in the UK and The Netherlands two years ago. 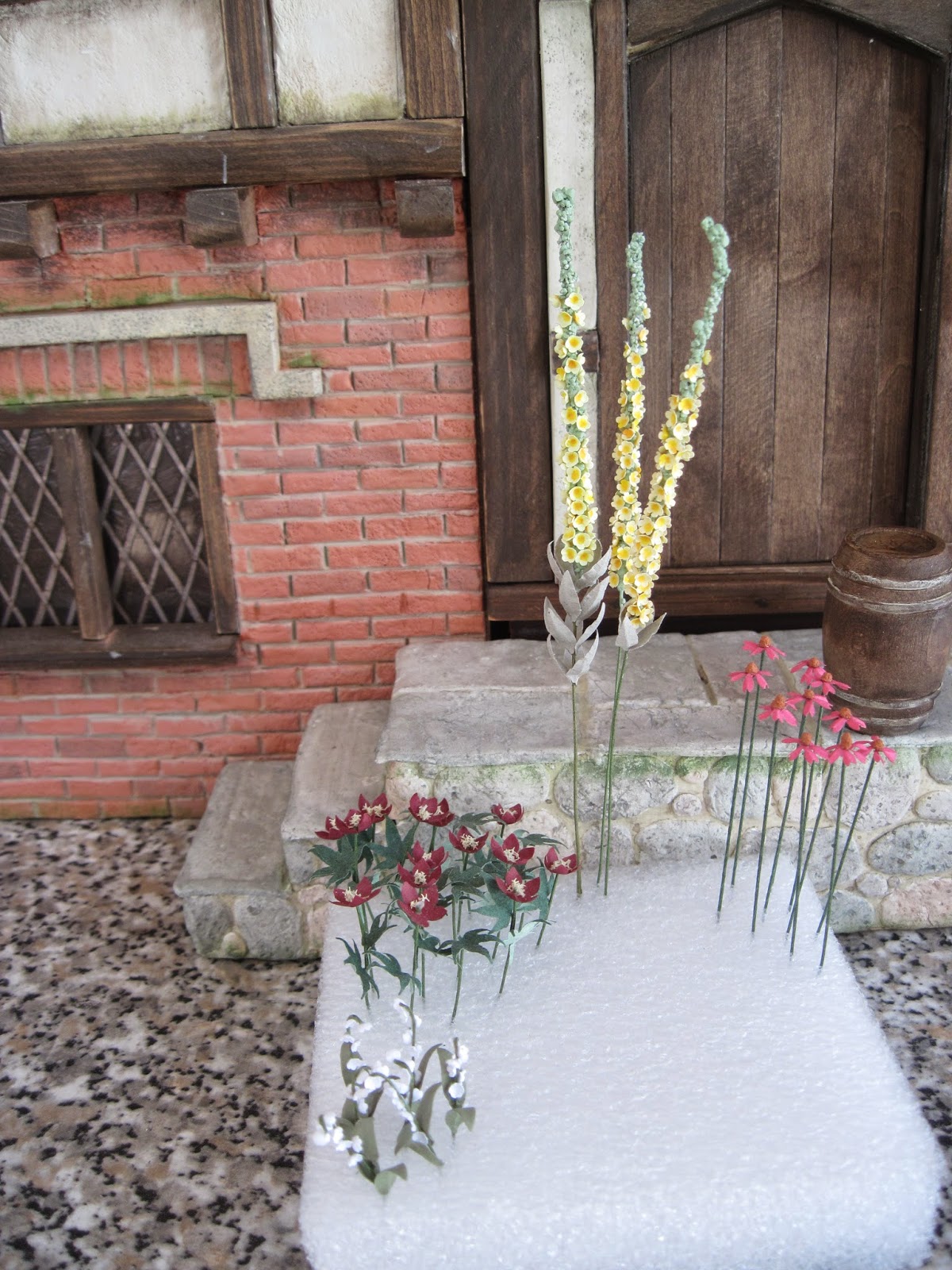 The tall plants at the back, which need an awful lot of hand-cut leaves still, are mullein or verbascum, useful against coughs, spitting blood, gripe and colic, while the fuzzy gray leaves were applied to wounds that were difficult to heal. The dark red plants at the left are black hellebore, which can be a serious poison but it is also used for heart ailments. Then we have dark pink coneflower, which pretty much everyone now knows as Echinacea, used for coughs these days, but originally it was used as a blood-purifier. The little plants in the foreground are lily of the valley; I am not entirely happy with the way they turned out, and will likely make them to my own design. Again, this plant is poisonous, but it has long been used medically in very small quantities.

Looking up medicinal plants is very interesting, and translating them into miniatures made of paper, wire, glue and sand is a challenge. The biggest challenge facing me is making up the foxglove kit; this requires me to roll teeny tiny hearts into a lipped tube shape with spots on the lip. Probably it will be one of the last kits to be made up!


Posted by pulchinella's cellar at 13:38 No comments:

Back from the Show

...and I didn't buy anything miniature! However, I did get some building components like turned wood pieces, hinges and so forth, which will be turned into miniatures one of these days. There were some plant-making items like flocking and flower pots as well. Someone was getting rid of a large collection of bits and pieces, and I got a small share of it. I am trying to be good and not accumulate all kinds of things that I have no projects on the go for...

Turns out I am not able to sleep that well in strange beds any more; I expect I am too used to my fairly hard mattress and ancient feather pillow. Anyways, I am still tired from the trip, which included a 5 hr. drive both ways on roads that are very badly affected with pot-holes, normal for early spring in any northern part of our continent. Good thing we didn't lose any tires, or hit any deer foraging around and through clearings alongside the Trans-Canada Highway.

Now it's on to producing some new stock for the next show, which takes place the first Saturday of May. That is only a 2 hr. drive away and a 1-day show, and I'm hoping the pot-holes will have been filled a bit by then. This means it may be a bit quiet on this blog for the rest of April, although I will post photos of things I manage to make.

Posted by pulchinella's cellar at 10:13 No comments:

The last few days have consisted of lots of little jobs being done on various components of the Apothecary Shop, which have finally come together in a way worth photographing. 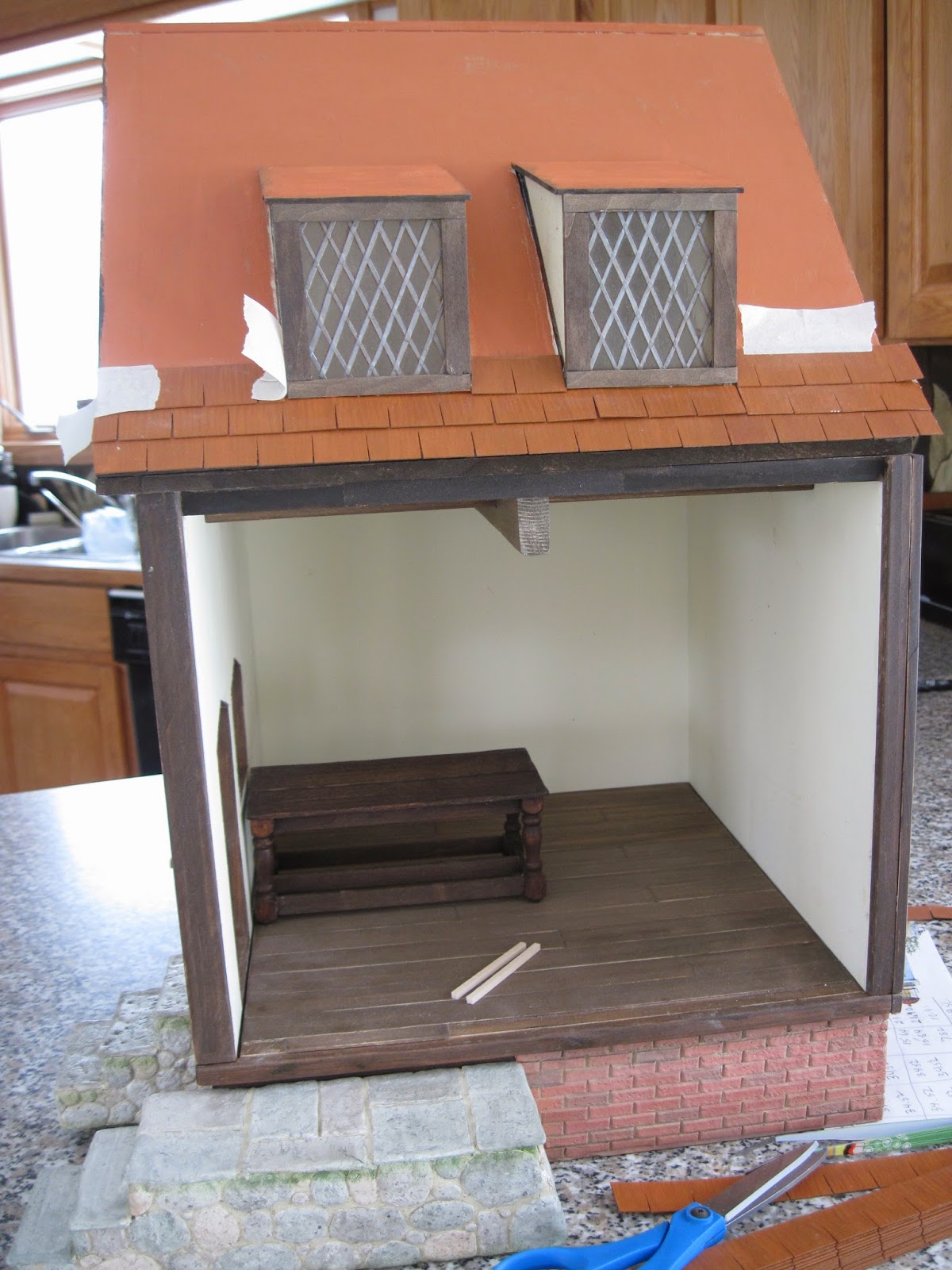 The dormer windows have been installed, the steps have been painted, and the roof is being tiled. Once again this is a long-term job, as each course needs to dry before I can do the next one - both ends are absolutely flush, so clamps are useless. On the right edge, I am leaving extra tile as there will be beams and plaster there; this is the gable over the eventual apothecary garden. 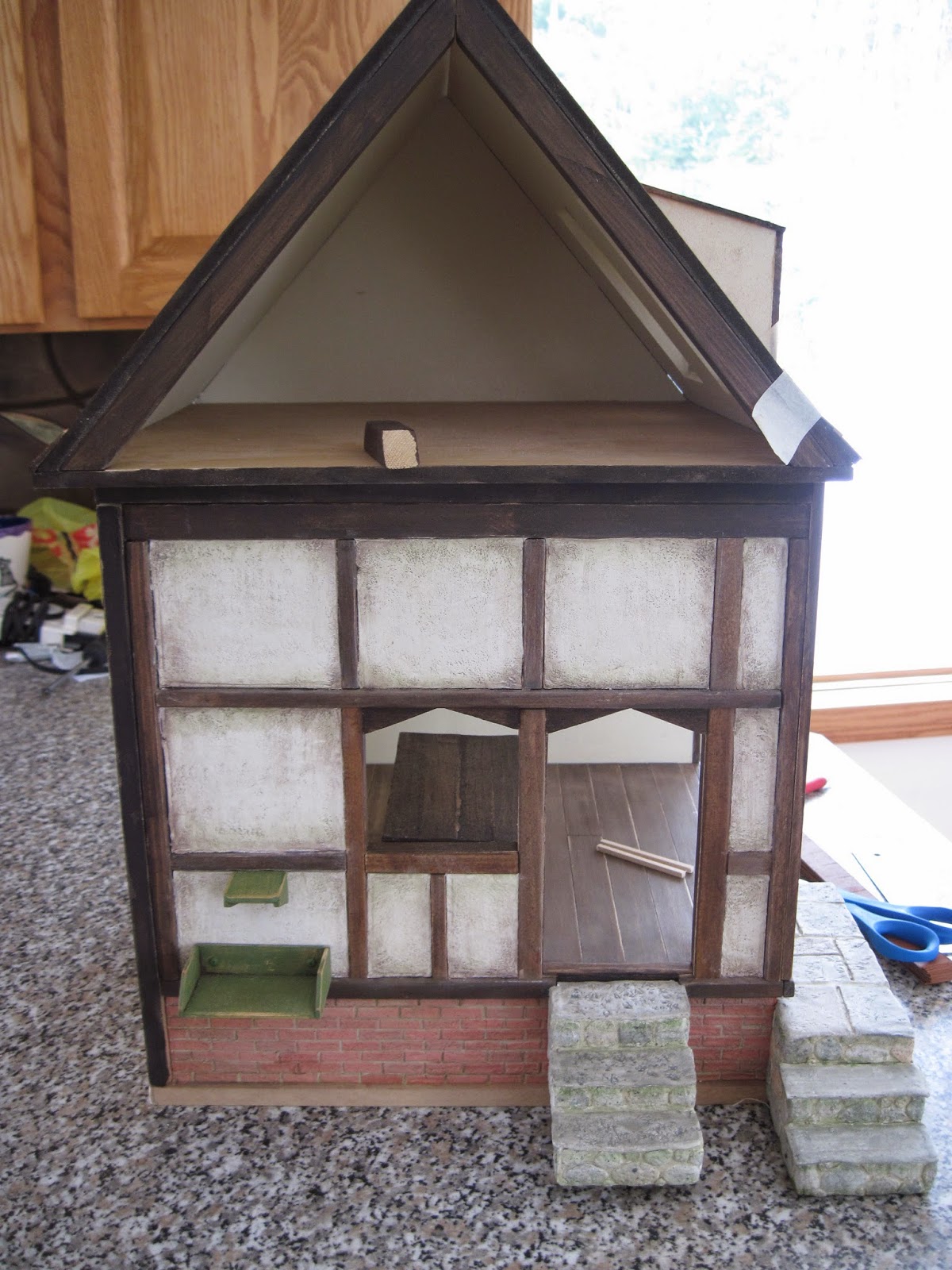 The planked floor in the attic on this side is a different shade from that of the workshop, to add some variety. Once things are dry, the little tie-beam lying on the floor will be installed in the apex of the roof. The base of this side of the shop is still raw wood, as I have to decide what colour to paint it once the whole thing is sitting on its base. The base is intended to look like a courtyard when the buildings are opened, and will likely have stone slab flooring or cobbles. That is a decision for the future.

This will be the last report for a few days, as some of us are heading off to a show on the weekend. The Tudor Apothecary Workshop and Shop are going along, although the shop end is not quite finished, but people can get an idea of what the finished product will look like - I hope! I am looking forward to viewers' comments, and who knows, perhaps I'll pick up some items to go into the project too.
Posted by pulchinella's cellar at 12:16 No comments: