Miniatures are still being constructed, but are having to take a back seat to Real Life, unfortunately.
Mid-month I got news that my sister on the other side of the country - Vancouver Island - was dying. We lost her this Monday; 23 years with Parkinson's Disease had resulted in a body that could no longer carry on. She will be missed. 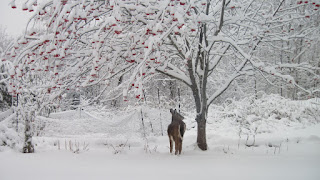 Yesterday it began to snow; today, this is what my garden looks like, complete with one of this year's fawns - Virginia Whitetail, for those who want to know - in its heavy, dull brown winter coat. 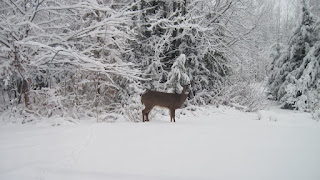 And here is the doe, watching her baby. Soon baby will have to make it on its own, as mom is likely going to have another baby before too many months pass.

Yesterday, Marilyn and I delivered the Remembrance Day Project to the Engineering Museum at our local armed forces base. We had expected to simply drop it off, but when we arrived there were a couple of dozen soldiers awaiting us, along with some officers, including the lady Colonel who is in charge of the Engineers. It was very flattering to have such a nice fuss made over our project. I will try to get a photo of it; I didn't realize there is no finished photo of it on the blog. We were each given a heavy souvenir coin of the regiment, and a guided tour of the museum in which our project is going to be living.

I am still working on the Camp project, as well as on things to go into a new room box that I will talk about in another post.

Posted by pulchinella's cellar at 17:50