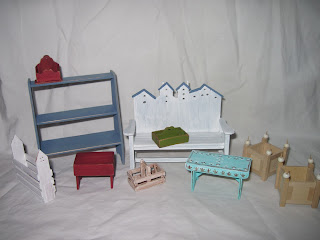 It's been an interesting week or so. Last week Friday my car was totalled while my younger daughter was driving home from work; fortunately, she is fine except for some soft tissue injuries, pains in her neck and back. It took several days before the body shop was ready to do the estimate, and on Monday afternoon I got the word that they had stopped the estimate as they had already exceeded $15,000 in parts and labour. Goodbye, little black Echo, I had hoped you and I would fall apart at the same time!

I am so grateful my daughter wasn't seriously hurt, or worse.

So yesterday I picked up my nearly new car, a repo 2012 Hyundai Accent with less than 4,000 km on it. It is bright red, which pleases my daughter no end - much more youthful than plain black. She shares my car with me to get to work, as we live outside the city and thus have no public transport available.

I've been working on UFO's some more, as well as making some new things and repairing some broken items. My confidence in my ability to do woodworking isn't that great, but I do enjoy trying smaller woodworking projects.

The red and green "antique" boxes and the dirty white garden carrier are going into my things for sale, along with the barn-red  small bench. The bird-house bench and narrow planter are pieces I'd like to decorate somewhat like what I saw in one of my many old mini magazines, the problem is that I can't remember which one! So I am sort of re-reading most of them in the hope that I will stumble on the correct ones. My memory tells me they were photos featured in show reports, hope I am remembering that correctly.  I have yet to tackle my years of the smaller old Nutshell News, because I think I got the idea from one of the larger format magazines. Re-reading them feels sort of like a waste of time, unfortunately, I'd rather be making things.

The Versailles planter boxes are going to be white over a light stain, in order to antique them a bit. I'd like to try making an orange and a lemon tree to go into them. The blue bucket bench needs to have water stains and rings added to it. And the robin's-egg blue painted bench will go with the CMHH '12 project, it goes very well with the ochre wall tones. The design for that came from one of the Dutch doll-house magazines, and I've wanted to try it since I first saw it.

While waiting for paint and glue to dry I've been working on a gorgeous  Aubusson carpet in 1/24 scale, for the auction at Camp MiniHaHa '13. The design is from a German website, an amazing lady who works in 1/144 scale, Anna Carin Betzan. My version of the carpet is done on 22 ct. canvas. I'll post a photo when it is done, as I only have the baby blue background left to do.

Next on the list of things to do is to try eggshell carton paving for the CMHH '12 project; it came with small pieces of real slate, but there isn't enough to do the whole front of the vignette, so egg cartons will have to do. I saw the Victoria Miniland example while I was in Victoria in March, and it was very impressive. If the paving works, I may do the chimney stack in my Tudor house in egg carton bricks - I need something that won't stick out as much as bricking, and some of the items I've seen done on blogs lately look really good. Tudor bricks tended to be larger in size than modern brick, as well as being orangey and brownish rather than brick red.

While visiting Windsor Castle last year, I found a whole compound of wonderful bricked Tudor buildings below the chapel on the grounds; I believe they used to house the clerical staff of the chapel originally. One of these days I will post some photos of them, they were built in a circle with a gate, and a street with larger buildings leading off it. Private dwellings now, I was allowed in to take
photos by one of the residents, for which I am most grateful.

Posted by pulchinella's cellar at 17:39

Email ThisBlogThis!Share to TwitterShare to FacebookShare to Pinterest
Labels: Woodworking